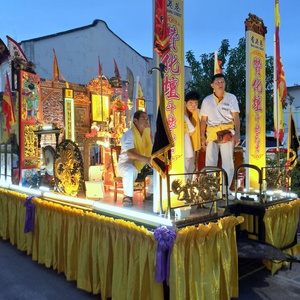 Talk about grand celebration of Chinese festival in Penang, the Nine Emperor Gods Festival recognize one of the events to talk about. The annual festival not only carry out at multiple Taoist temple around George Town, other part of Penang island and Butterworth area, also attracts thousands of devotees and tourist to participate the yearly event.

There is a popular story within local culture said the Nine Emperor Gods are actually nine sea bandits from Ming Dynasty fight against Qing Dynasty, they came from society heaven and earth. Nine of them eventually caught and beheaded by the river site on ninth day of ninth month. However, the spirits still lingering around the place and caused havoc to the peoples. Later the Imperial Court conferred the spirits with the title of Nine Emperor Gods and sent the spirits off to sea in royal boat and out of China. Where-ever the boat sailed by in the South-East region, the country folks set up shrines to venerate the spirits. That could be why the celebration only taking place mainly in South-East Asia countries like Thailand, Myannmar, Malaysia and Indonesia.

Celebration taking place on the ninth day of the ninth lunar month, but the festival begins on the last day of eighth Chinese lunar month as welcome ritual. The devotees also start vegetarian diet on the same night to purify their bodies. A street procession starts from the temple and proceeds to a nearby river or sea where the gods are to be invited. Once the gods invited and the parade eventually carry the spirit back to the temple, worshippers will visit the temple with offerings to ask for blessing. During the period, activities carry out such as bridge-crossing, walking over fire pits as part of the purification ritual and receive gods blessing.

On the ninth day, there will be a procession as part of sending off the deities back “home”. The sending off will start from the temple to a selected river / sea nearby, company by lion dancers, stilt walker and musicians. Selected devotees will climb on a wooden boat with the flaming urn and travel towards the centre to symbolise the departure of the gods. These also follow by the ending of the vegetarian ritual when meat dishes are laid out to thank the heaven guards.

There are many temples in George Town Penang carry out the celebration and different temple may have different atmosphere. KIKIA provide online booking for private tour guiding service, charter car to make you travel with easy and fruitful.  Log in to our website now to choose your preferred guide or driver to bring you explore around! Click here to know more about the package offer and i am more than happy to bring aroun and share with you whatever i know!